Hey there friends! Have you been thinking “Hey, I need some ideas for a new garden gate?” Well you’re in luck, because for today’s project we’re going to upcycle a section of wooden fence into a DIY Rustic Garden Gate. Hands down, this is the easiest garden gate you’ll ever make! 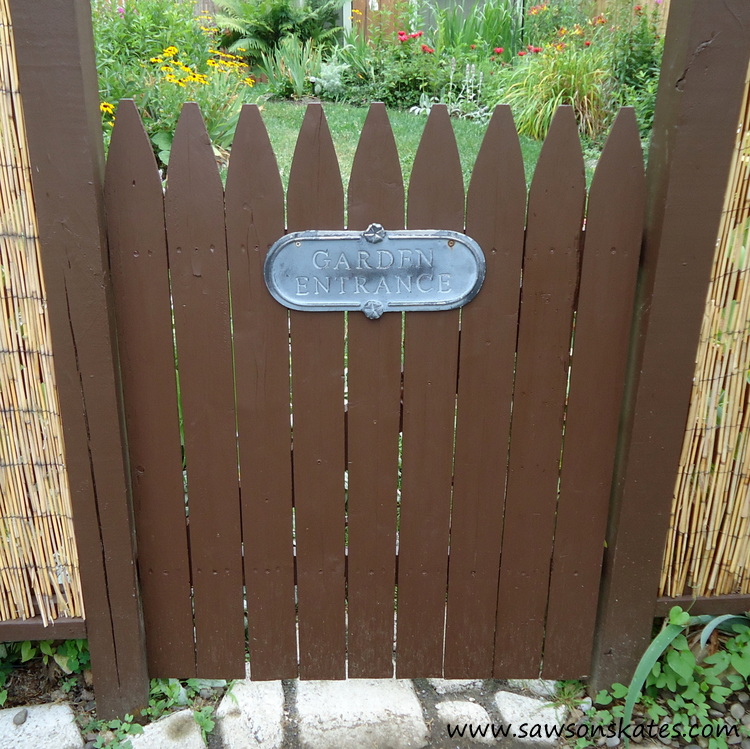 For your convenience this post contains affiliate links to products or tools I used to complete this project. Click here to visit my site policies.

When I built my original garden gate that leads from my patio to my garden, I was concerned about my retired racing Greyhound, Freeway jumping over the gate. Not only was he quick, but that boy could jump! Can I brag for a minute before I show you a pic of the original gate?

When I first adopted Freeway I took him to the dog park. As we entered through the gate a woman said to her average, nondescript dog (for the purposes of this story we’ll call her dog “Buster”) “Oh look Buster, here’s a dog that’s almost as fast as you.” Guys, I’m pretty sure I saw a thought bubble above Freeway’s head… “I consistently placed first, second and third in ALL my races… WATCH THIS!”

Just as soon as I heard the click of the leash as it released from Freeway’s collar, he spotted a squirrel at the other end of the park. He bolted as if he heard the starting pistol. Now this was late spring time and there was still standing water left from some melting snow. I would guess it was at least 10′ in diameter. Freeway approached the edge of the water and without skipping a beat, leaped like a deer totally clearing the water, gracefully landing on the other side where he continued his pursuit. I was wide eyed and Buster’s mom, mouth agape, just stood there silent. Needless to say I was a proud dad. Who’s faster now? Let’s see Buster do that!!! 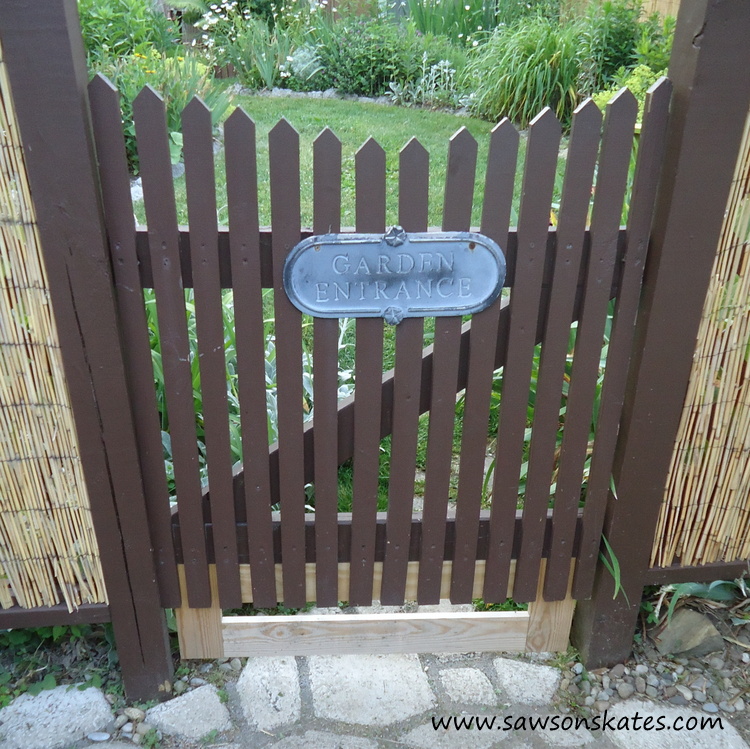 I’m still a staunch supporter of Greyhound rescue efforts, but after Freeway passed, I rescued my little Coco from an animal shelter. I’ve made a handful of pooch projects for her, and even though this is an outdoor project, it benefits Coco too. Here’s a pic of Coco helping me work on a new blog post in our outdoor office 🙂 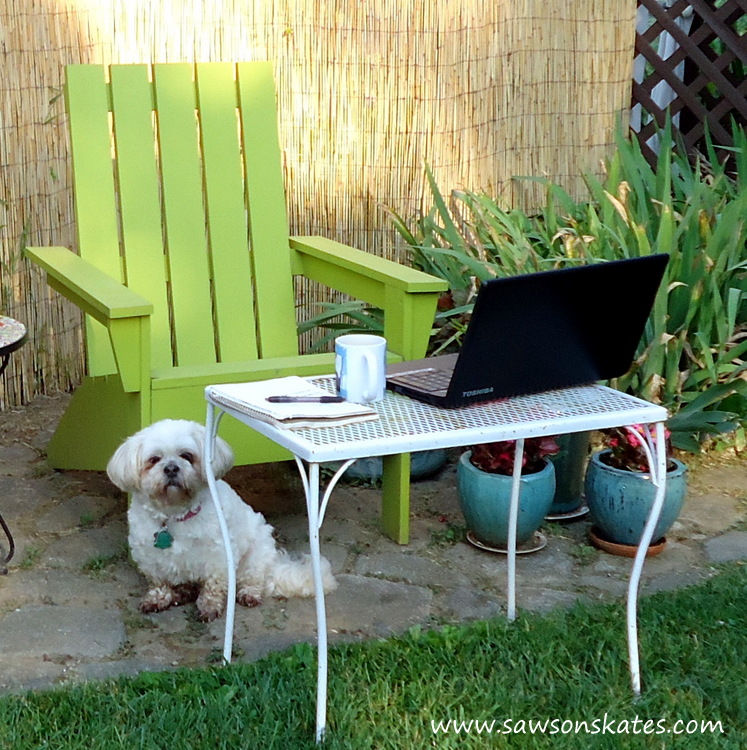 I didn’t have to worry about Coco leaping over the gate. No, instead I had to worry about her scrambling under the gate. Coco would poke her head under the gate and I knew it was just a matter of time before she would try to make her escape. I installed this makeshift section at the bottom to prevent her from getting out. It did the job, but it wasn’t very attractive. 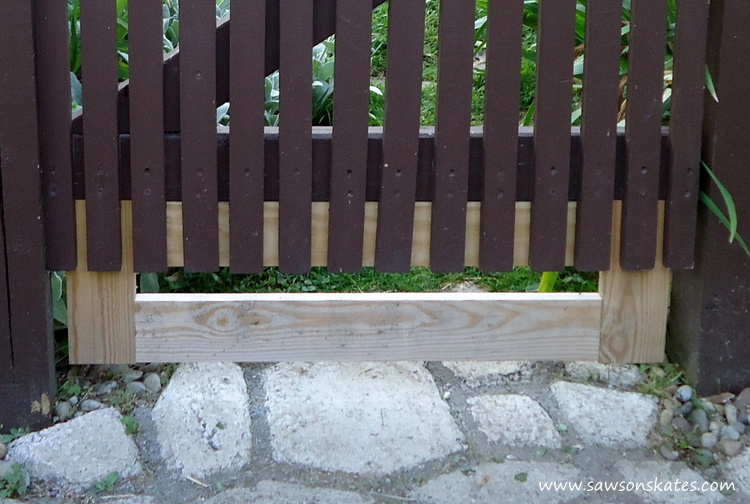 I wanted a new gate that would keep Coco safe, but was also an attractive entrance to my perennial and vegetable gardens. I considered designing my own gate, but I’ve had this piece of fence kicking around ever since I built my whimsical fence. Not only was it the perfect height it was nearly the perfect width of the garden gate opening! 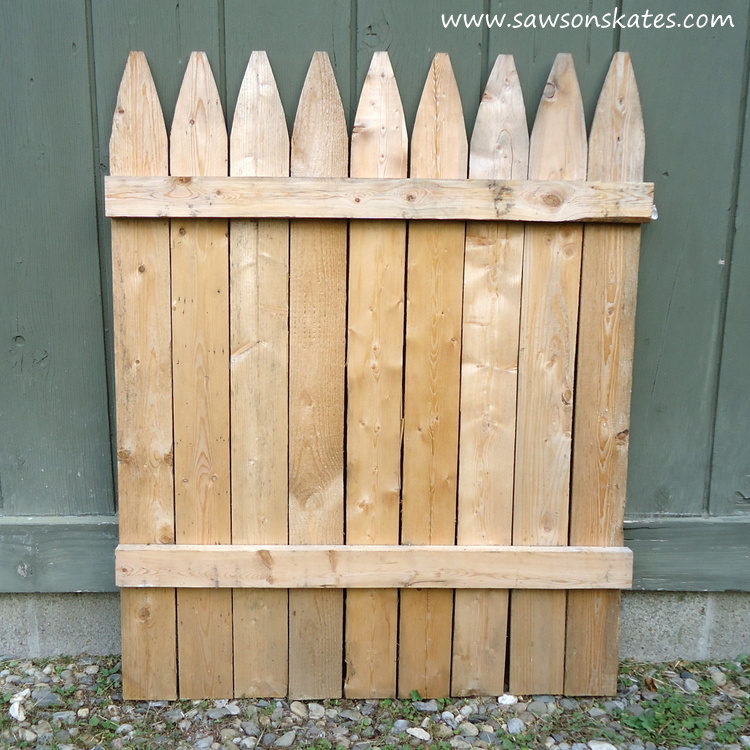 The fence needed just a couple tweaks to transform it from a section of fencing into an attractive rustic garden gate. This is a simple DIY project, let me show you how I did it!

Step 1. Trim the fence section to fit the opening. I made mine a 1/2″ smaller than the opening to allow 1/4″ of space on each side of the gate once it’s installed.

Step 2. Cut the Brace. The Brace will keep the gate square and prevent it from sagging. The top of the brace should be farthest away from the hinge side, while the bottom of the brace will be closest to the hinge side. Set a 2×4 across the gate and make marks on the brace where it intersects with the fence rails. 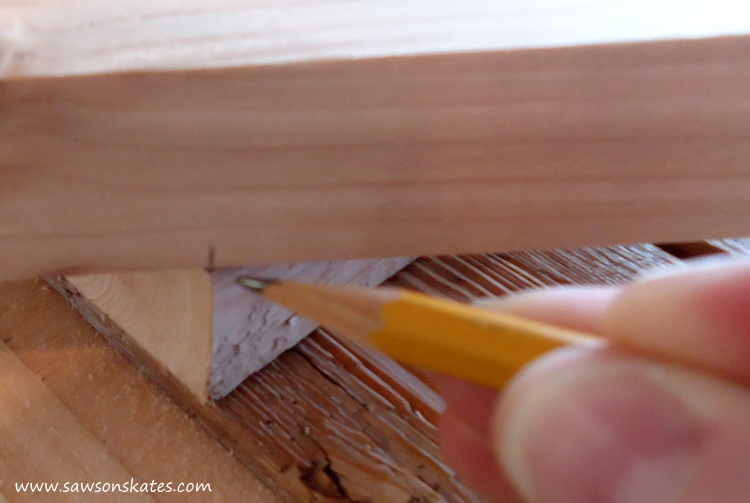 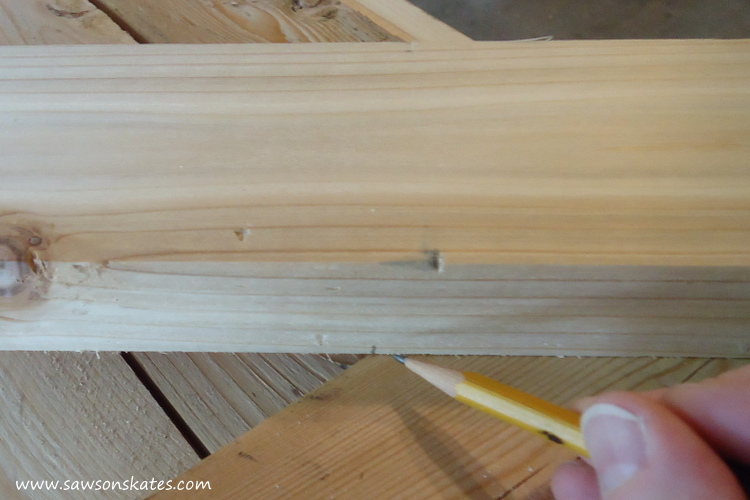 Connect those marks with a ruler. 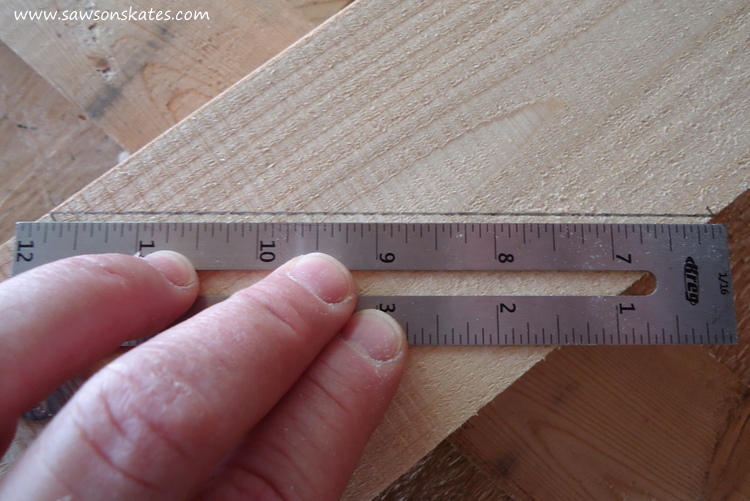 Place a crosscut jig on the line and clamp to the brace. 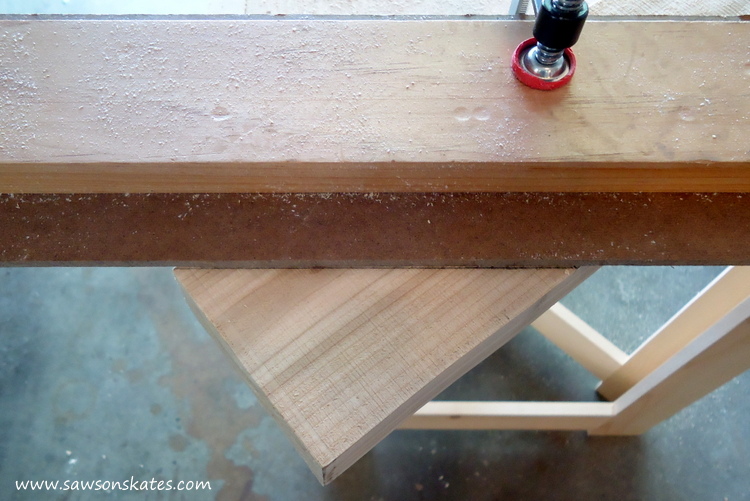 Use a circular saw to cut the excess. 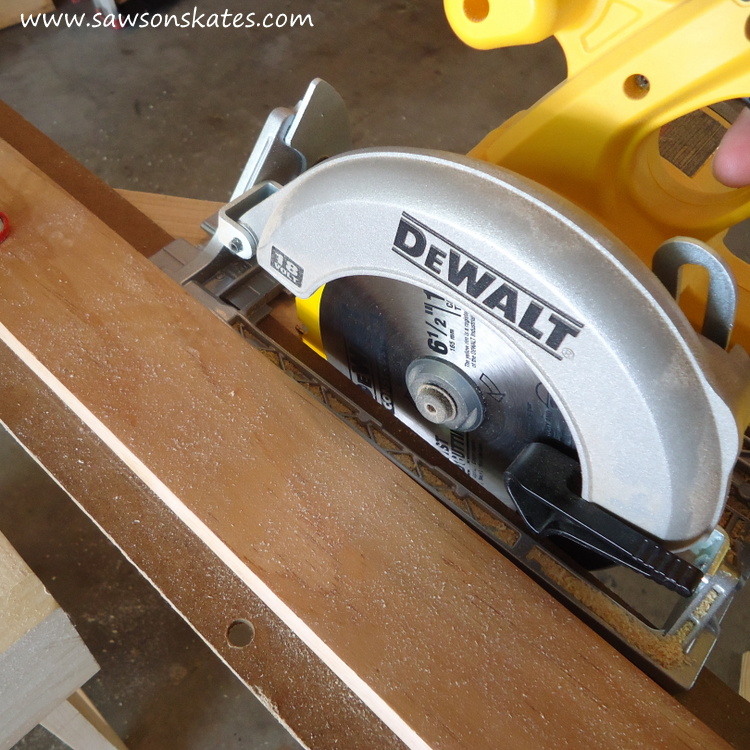 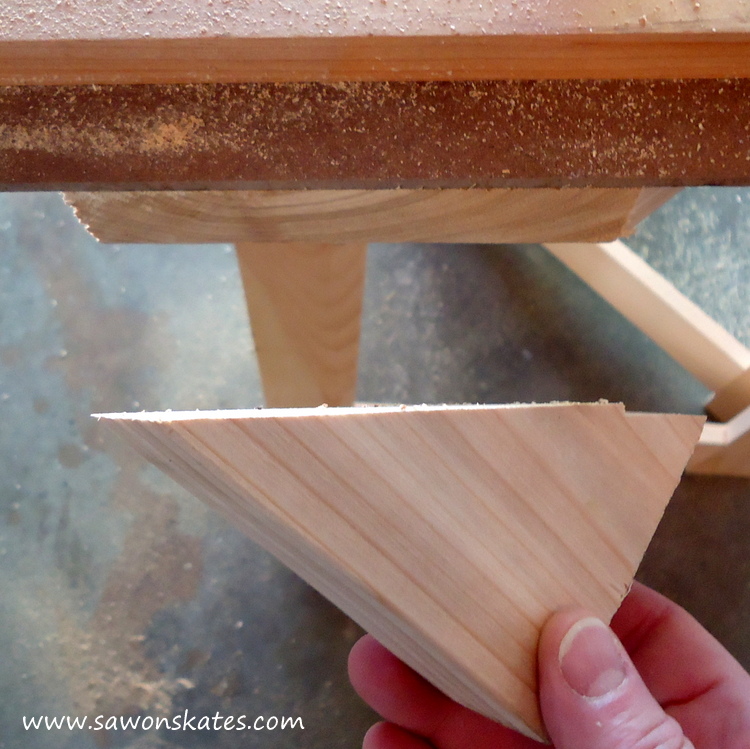 Test fit the brace and make any necessary adjustments. 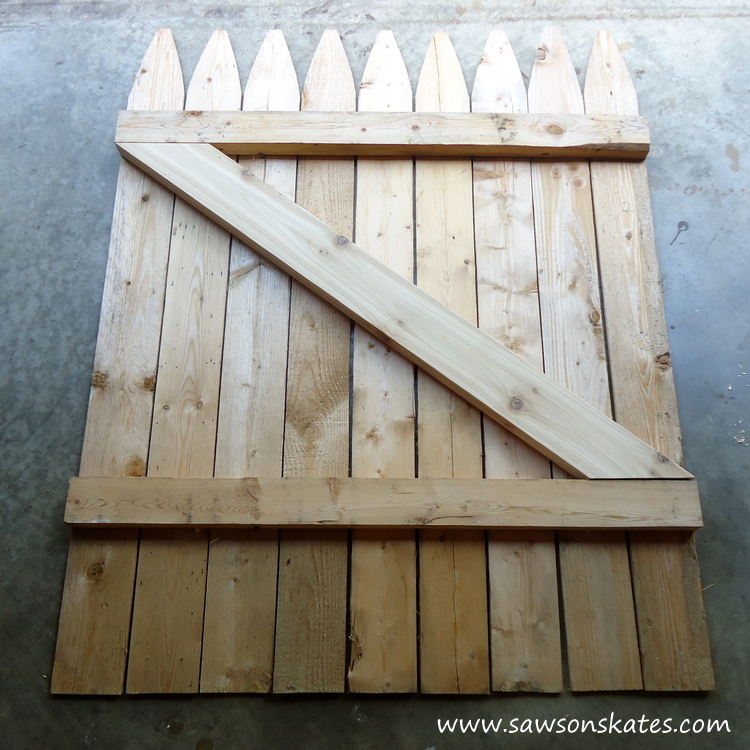 Drill a pocket hole in each end of the brace. 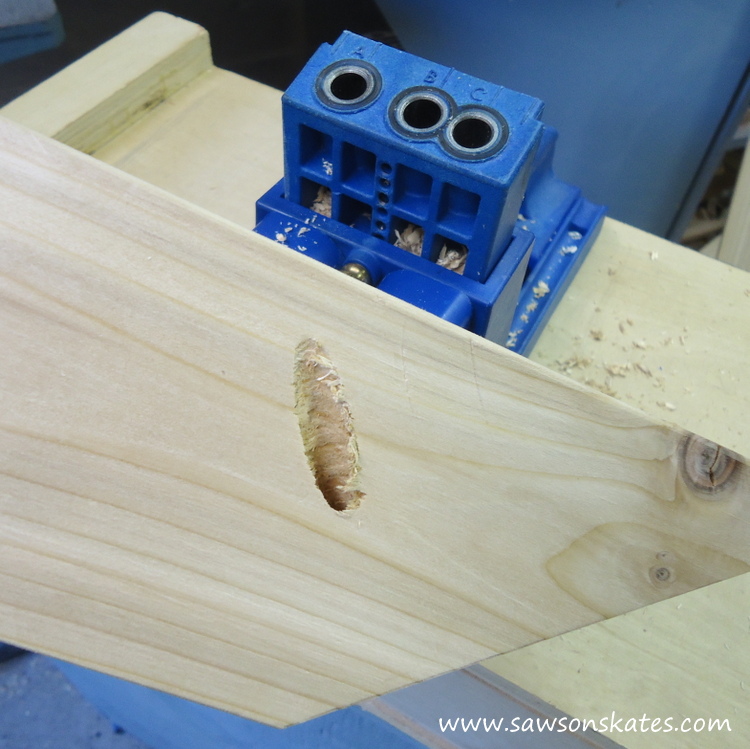 Step 3. The pickets on my fence were attached with nails. I wanted to give them some added holding power, so I drilled countersink holes. 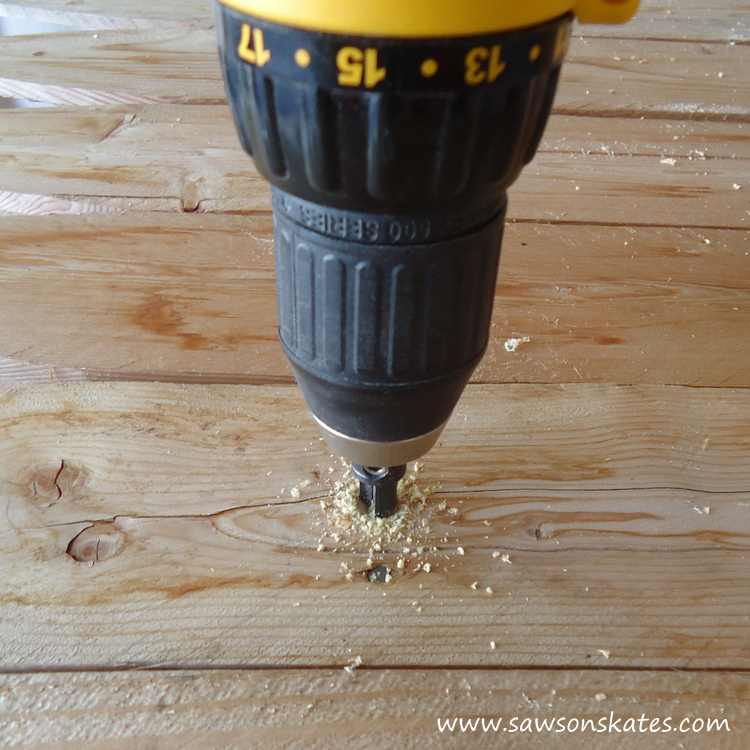 Then I attached them with 1-1/4″ exterior screws. 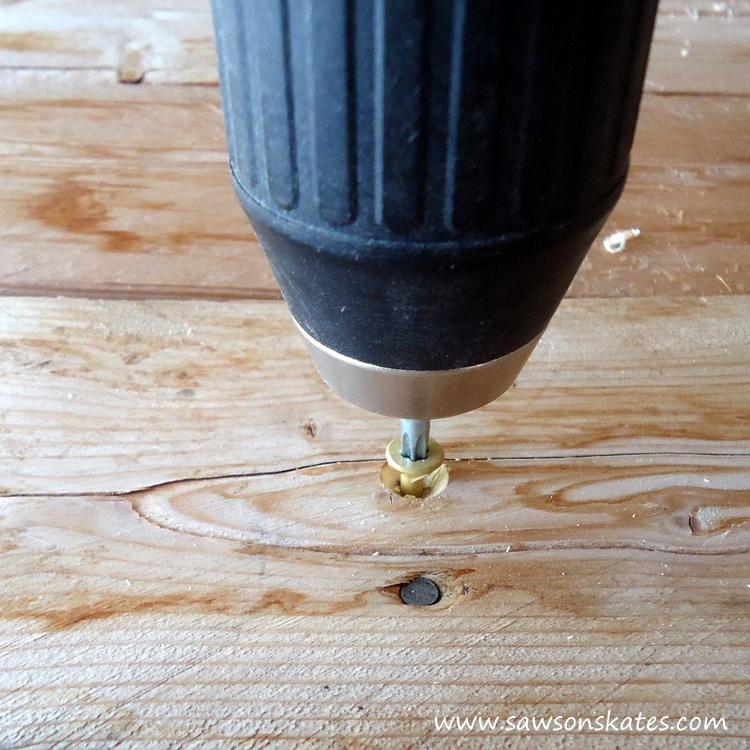 Step 4. Attach the Brace. Before I attached the brace I gave the back two coats of exterior wood stain. Then I clamped the brace in position and attached using 2-1/2″ pocket screws. 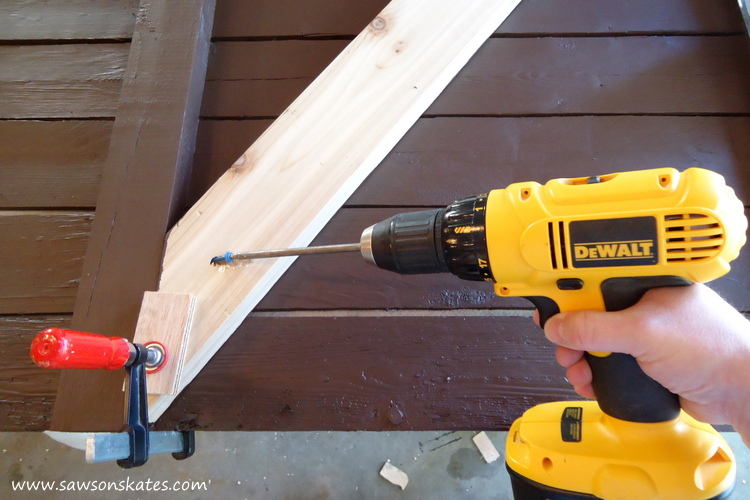 After the brace was attached, I flipped the gate to the front side and drew a diagonal line along the center of the brace. Along the line I drilled countersink holes. Then attached the pickets to the brace using 1-1/4″ exterior screws. I finished up the front with two coats of exterior stain. 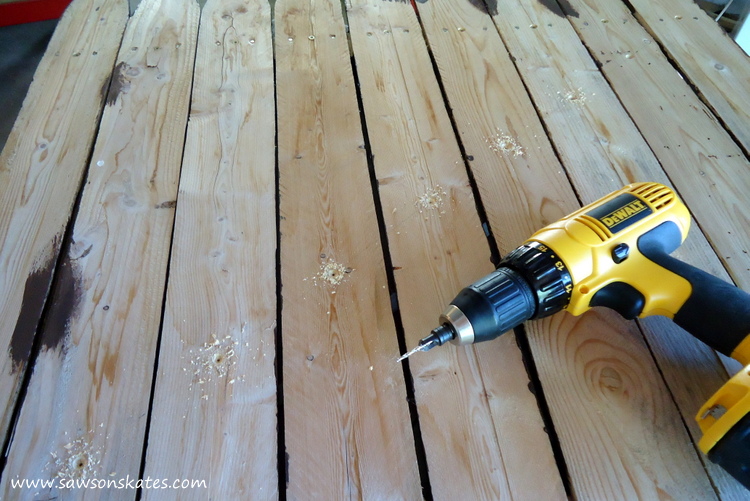 Step 4. The pocket holes were with Ready Patch to prevent rain water from collecting in the holes. Once it was dry, I sanded and applied two coats of stain to the brace. 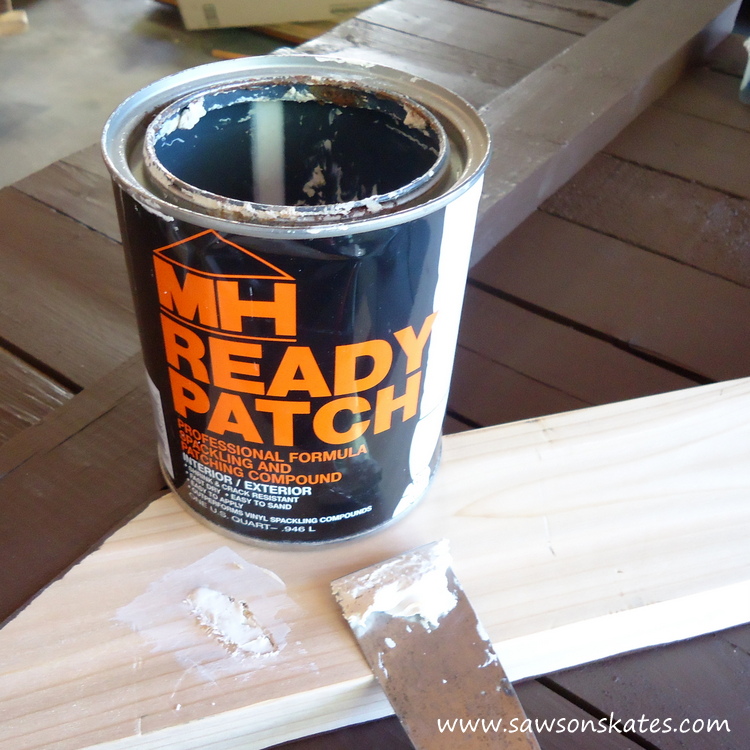 Step 5. Install the Gate. I reused the gate hardware from the old gate. The hardware was a little grungy, but still serviceable. I used painter’s tape to temporarily attach some MDF shims. The thickness of the shims was equal to the distance I wanted between the gate and the fence post. 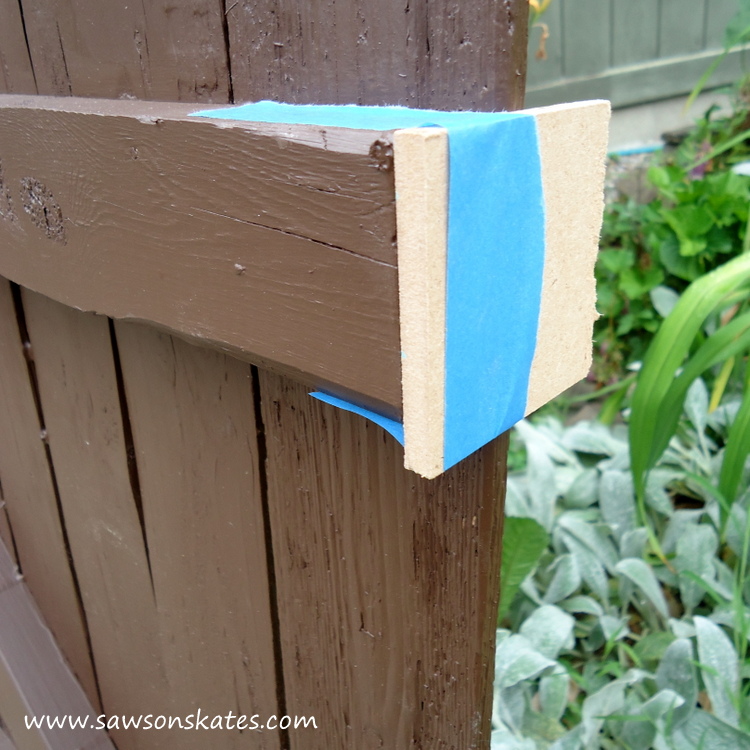 I centered the hinge on the gate rail and attached using 1-1/4″ exterior screws. 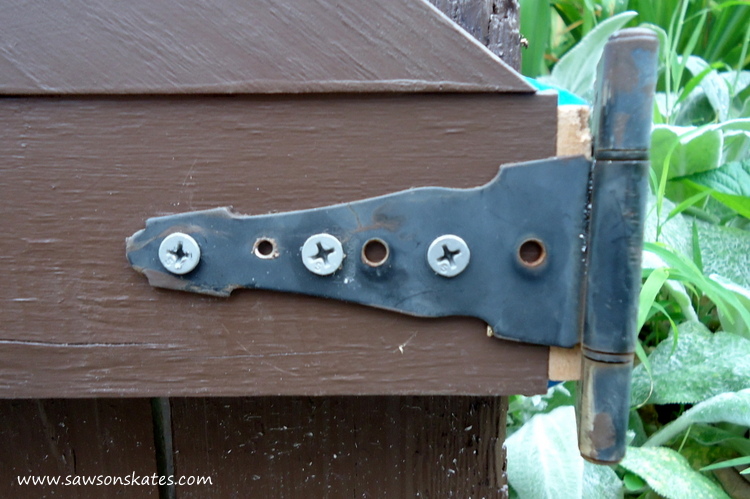 Then attached the gate hinges to the fence post with 2″ exterior screws. 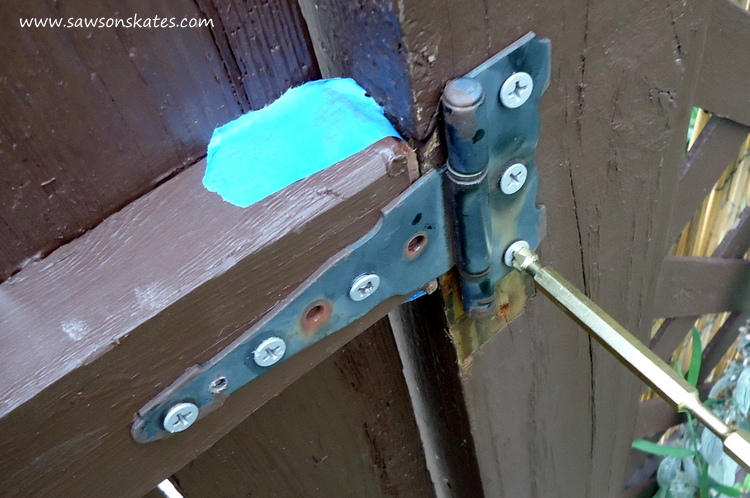 I removed the shims and then reinstalled the latch. 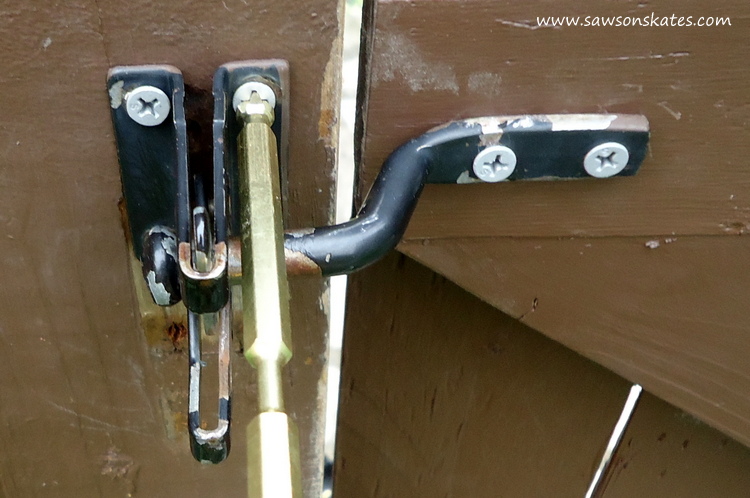 The gate is installed and lookin’ good! It’s just missing one thing… 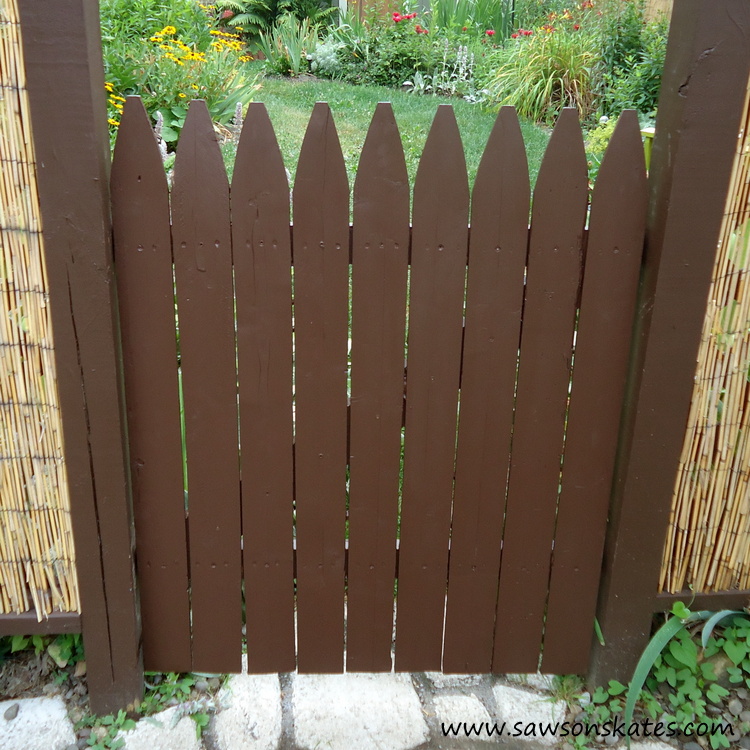 The last thing to do was to reinstall my metal “garden entrance” sign. Ya know, just in case I forget how to get to my garden 🙂 The new rustic garden gate is now ready to use! 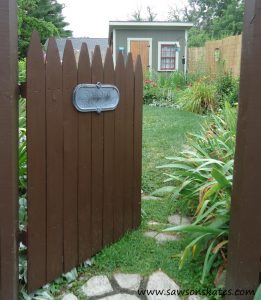 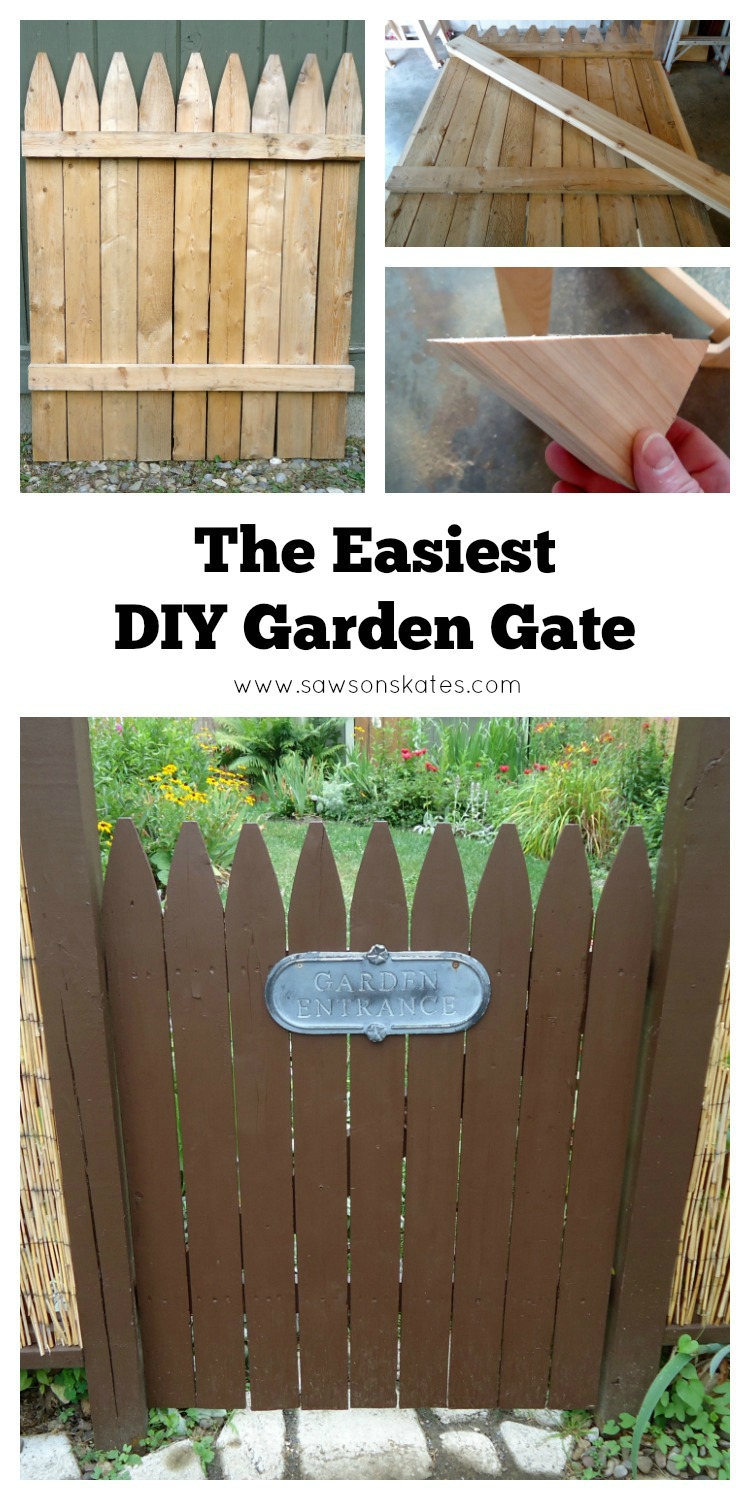