Wondering if you should get a jigsaw or a circular saw? I’ll explain the differences, uses for each, and help you decide which to choose for your project.

Which saw should you buy for your next home improvement project, a jigsaw or a circular saw? While both of these power tools have their place in the workshop, there are some key differences between them. In this article, we’ll look at those differences and help you decide which saw best fits your needs.

This tutorial contains affiliate links to supplies and tools. Purchases made using these links help support the Saws on Skates website and allows me to share more projects and tips with you. There is no cost to you for using these links. Visit my site policies for more information.

What is a Jigsaw?

A jigsaw is a compact, handheld power tool with a thin reciprocating blade that moves up and down, similar to the needle on a sewing machine.

The baseplate or shoe may be tilted to change the angle of the cut.

However, jigsaws have a fixed blade and can’t change how deep the blade cuts. Instead, the blade’s length determines the depth of the cut.

To cut with a jigsaw, you’ll stand behind the tool and position the shoe on top of the workpiece. The baseplate has markings that help you guide the saw along the line you wish to cut. Next, push the saw across the material, guiding it along the cut line.

Jigsaws are a fairly safe tool to use. They cut relatively slowly compared to other saws, allowing you more time to react before something goes wrong.

However, because the blade is exposed and cuts beneath the workpiece, you may not be aware of what it’s cutting until it’s too late. It can cut through anything in its path, including your workbench, a power cord, or even your fingers. So check for any potential hazards before you start the saw and keep your fingers away from the blade’s path.

Jigsaws are available in corded or cordless models. Corded jigsaws are less expensive and have more power than cordless versions. Cordless jigsaws are more expensive but offer greater portability and flexibility.

What is a Jigsaw Used For?

Jigsaws are versatile tools used for various tasks around the house, workshop, or job site. With the right blade, jigsaws can cut through materials such as wood, plastic, metal, and ceramic tile.

A jigsaw’s standout feature is its ability to make curved cuts thanks to its thin, vertical blade that can be turned in almost any direction. Jigsaws are ideal for cutting circles, curves, and other intricate shapes that would be difficult or impossible to cut with a traditional saw.

They are frequently used to cut shapes for crafts, make holes to fit around pipes and obstructions, and other woodworking projects.

It’s also excellent for cutting in tight spots or hard-to-reach areas where it would be difficult to use a larger saw.

There are a few drawbacks to using a jigsaw. This tool requires a steady hand to guide the saw along the desired cut line; otherwise, the blade can wander and produce an inaccurate cut.

A jigsaw can also make straight cuts; however, it lacks a fence, so it doesn’t cut as precisely as other saws. You may use a straightedge for greater accuracy, like a speed square or Kreg Straight Edge Guide.

Related: Kreg Straight Edge Guide (How to Use and Review)

Another disadvantage of a jigsaw is that the blade may flex from top to bottom, particularly when cutting thick or hard materials. This can result in the cut being angled relative to the face of the workpiece.

The shank is the part of the blade that inserts into the saw. Jigsaws use either a T-shank or U-shank blades.

T-shank blades are the easiest blade type to replace. They have a T-shaped shank that inserts directly into the tool and is held in place by a retaining clip.

U-shank blades are more cumbersome to replace than T-shank blades. They have a U-shape shank that is held in place with a screw or a nut, meaning you’ll need a screwdriver or a wrench to change the blade.

💡 TIP: When shopping for a jigsaw, I recommend looking for one that uses T-shank blades as they are much easier to replace if the blade breaks, when it becomes dull, or you need to change it for a different type of material.

The teeth on a jigsaw blade are responsible for cutting the material. The number of teeth on a blade will determine the speed and quality of the cut.

Teeth per inch (TPI) measures how many teeth are on the blade per inch of length. The higher the TPI, the finer the cut. For example, a blade with 12 TPI will leave a smoother finish than one with only 6 teeth.

The number of teeth also affects the speed of the cut. If you want to remove material quickly, use a blade with fewer teeth. However, be aware that this blade type is also more likely to tear the material. On the other hand, a blade with more teeth will cut more slowly, but it will produce a cleaner, smoother edge.

What is a Circular Saw?

A circular saw, sometimes known as a Skilsaw, is a small, lightweight power tool that uses a spinning blade to cut through materials.

The blade is mounted above a base plate and may be raised or lowered to adjust the cutting depth. The angle of the cut can also be adjusted by tilting the blade.

To cut with a circular saw, you stand behind the tool with the base plate on top of the workpiece. Markings on the baseplate help you guide the saw along the line you want to cut. Then you push the saw across the material, guiding it along your cut line.

Circular saws are dangerous for a handful of reasons. For starters, you can’t always see what’s in its path because the blade is exposed and cuts beneath the workpiece. The spinning blade can quickly cut through anything, including work tables, sawhorses, or your hand.

Another hazard is kickback which occurs when the blade binds in the material, causing the saw to forcefully kick back toward you, which can lead to serious injury.

Because of these dangers, take caution when using a circular saw. Read and follow the manufacturer’s safety instructions, use the correct blade for the material you’re cutting, and keep your fingers away from the blade’s path.

Both corded and cordless circular saws are available. Corded saws offer more power, but you need to be near an electrical outlet to use them. Cordless saws run on batteries, so they’re more convenient but are less powerful.

What is a Circular Saw Used For?

A circular saw is one of the most versatile tools in a DIYer’s workshop, as it can be used for tasks such as cutting lumber, plywood, metal, and even masonry.

One of the biggest advantages of a circular saw is its ability to make straight cuts such as rip cuts, crosscuts, miters, bevels, and even plunge cuts.

Although a circular saw is designed to make straight cuts, it lacks a fence to ensure that the cut is truly straight. In other words, when making a cut, people often have to eyeball it, but you can use a straightedge to improve its accuracy.

When you use a circular saw without a straightedge, the advantage is you can make cuts almost anywhere. However, they are not as accurate as ones made with a straightedge.

Depending on the task, a straightedge might be anything from a speed square to a circular saw guide to a level.

Related: How to Make a DIY Circular Saw Crosscut Jig

A speed square, for example, will act as a fence for the saw’s base plate. You’ll set the saw’s plate against the side of the square, which guides the blade in a straight line.

Optional accessories may also be used to make straight cuts with a circular saw, such as the Kreg Straight Edge Guide, Kreg Accu Cut, Kreg Rip Cut, or the Kreg Crosscut Station.

Related: 4 Ways to Make Straight Cuts with a Circular Saw

The maximum cutting depth of your circular saw is determined by the diameter of its blade. The measurement between the tip of the blade and the bottom of the plate determines how deep a cut you can make. A bigger blade means deeper cuts.

The blade size you need is based on the thickness and type of material you want to cut; however, most basic cutting tasks can be accomplished with a 6-½ to 7¼ inch circular saw.

Related: How to Change a Circular Saw Blade (+ Blade Direction)

What are the Differences Between a Jigsaw and a Circular Saw?

Now that we covered the basics of a jigsaw and a circular saw, it’s time to compare and contrast them.

The most obvious difference between a circular saw and a jigsaw is the type of blade each uses. A jigsaw uses a thin-toothed blade that moves up and down to make cuts, while a circular saw has a rotating blade that cuts as it spins.

A circular saw cuts faster than a jigsaw; however, the slower speed of a jigsaw allows for more control over the cut.

A circular saw’s cutting depth may be adjusted, whereas a jigsaw’s blade is fixed and lacks this ability.

Another important difference to consider is safety. A jigsaw is generally a safe tool to use, while a circular saw can be quite dangerous, but each has the ability to cause serious injuries.

Should I Buy a Circular Saw or a Jigsaw?

The answer to this question depends on the type of cuts you need to make.

Do you need to cut curves or straight lines?

Is a jigsaw better than a circular saw?

Can you make straight cuts with a jigsaw?

Yes, it’s possible to make straight cuts with a jigsaw, but it’s difficult to make them perfectly straight without using a straightedge, such as speed square or an accessory like the Kreg Straight Edge Guide.

Is a jigsaw safer than a circular saw?

Yes, a jigsaw is generally considered to be a safer tool than a circular saw because it has a slower-moving blade. However, both tools can cause injuries if used improperly.

When deciding between a circular saw or a jigsaw, it comes down to the type of cuts you need to make. If you’re looking for a tool to make intricate, curved cuts, then a jigsaw is the better choice. However, if you need a tool to make straight cuts, such as cutting plywood sheets, then a circular saw is the better option. Keep in mind that both tools can be dangerous if used improperly.

Thank you for stopping by. If you enjoyed this tutorial, would you please take a moment and pin it to Pinterest? I’d really appreciate it!

Pin This For Later 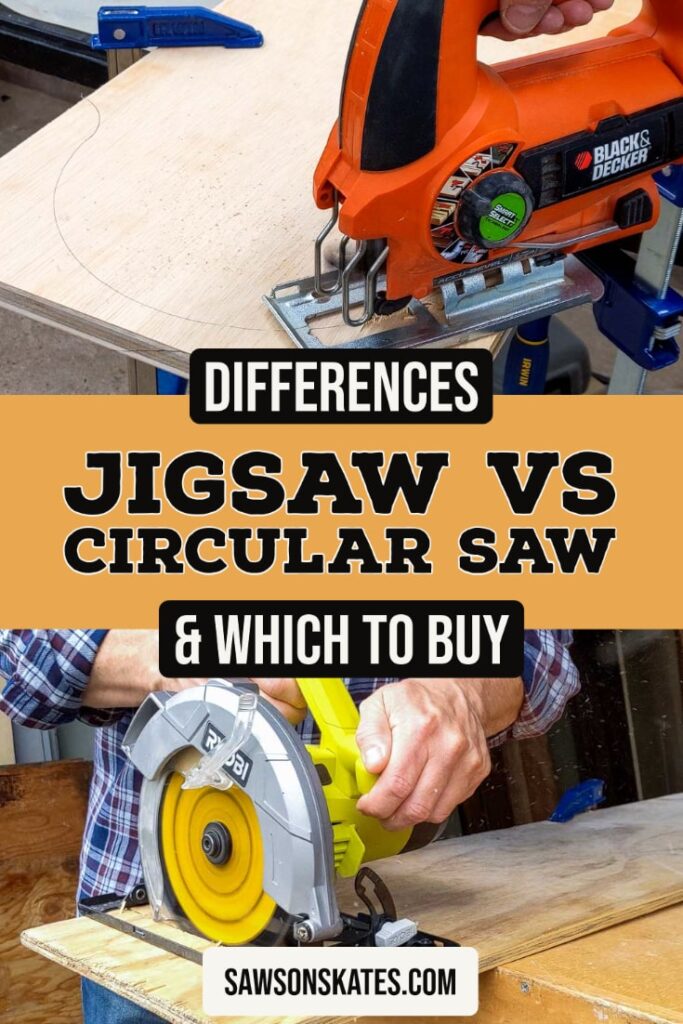